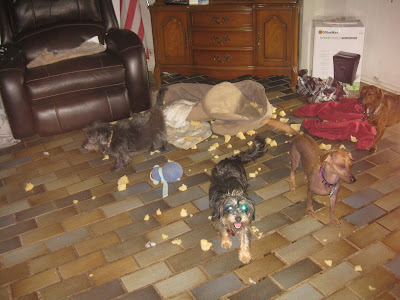 Oh no who left the door open?
Those tree rats make such a mess.
xo Cinnamon

Uh-oh. It looks like someone broke into your house and made a complete mess of things. *wink, wink* BOL

OMP!!!! I'd be runnin' for the closets if there was a mess like that anywhere NEAR my beds.
Yes. . . I did say BEDS.
Love Noodles

Oh NO....looks like a gang of squirrels got in your house!

Hailey and Zaphod and their Lady said...

Some other doggy clearly broke into your house and made a mess!

A good time was had by all!

Look at that mess.. So who is going to clean it up??