This post is dedicated to Arnold, a 13 year DROH foster, who crossed the bridge in October.

Arnold came to our door one Sunday afternoon in 2001. He was roaming the neighborhood looking for scraps. At first I just shooed him away, but then I felt sorry for him and let him in the house. He promptly peed on our wall so I kicked him back out. A few minutes later I saw him dodging traffic. I knew his number would be up if he didn't get out of the street so I let him back inside, but I told him if he peed again it was over, he'd be back out the door. He never peed in the house again.

We took Arnold to our Vet to be checked for a chip. He had none. While we were there a lady gave us the name of a rescue group in Houston that specialized in Dachshunds. The contact there was Shelly Bingle. The rest is rescue history. We kept Arnold as well as many others that followed him. We still have eleven. Arnold has been suffering from heart failure for some time now and this morning he had his ticket over the rainbow bridge bought and paid for. We took him to our vet and sent him on his way. He was good little boy and will be missed. We gave him a home and he gave us his love. I think that was a pretty fair trade. 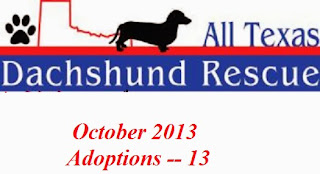 Name: Docker
Description:
Docker is the red and white,  blue eyed tazmanean devil!  He is mostly deaf and does not bark.  He is housetrained, very happy and affectionate and likes to prewash your dishes.  This little guy is a sweetheart, he is winning the heart of all of his family's houseguests!  He'll be available until someone nabs him! 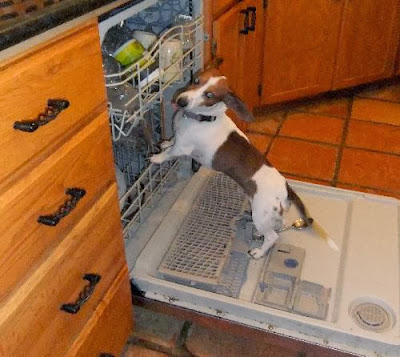 Wow !! Wonder if his new family would hire him out? 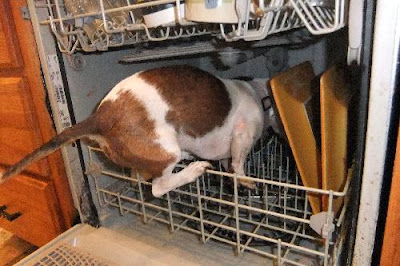 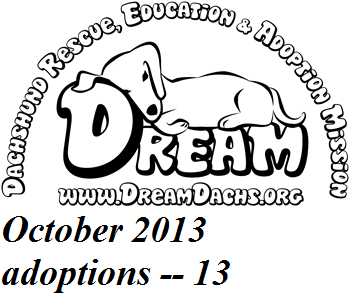 Cato is just the best. His personality has blossomed; he is bold, inquisitive, and happy. He and the Corgi spend a lot of time chasing each other around the den with Cato leading the play. It's great exercise for both of them, better than we expected. The cats are distant, but, hey, they are cats.

Just wanted to share that all is going great between Ziggy and Ross.
Ziggy encourages Ross to dash out of the house to the backyard (and Ross rushes out before he realizes "Yey, where's mom?" LOL). They constantly are interacting ... either "mock fighting", playing together (sometimes side-by-side each with their own toy), or sleeping next to one another on their own furry blankets (Ziggy loves to burrow into his, and at first I thought he had disappeared before Clay pointed out to me that there was a pair of eyes peeking out from the folds of the blanket). To fully understand how great they get along ... they even eat side-by-side and will wait patiently while the other gets a treat (knowing that he will get his treat next).
Ziggy loves getting up on the window ledge to look out. He has 2 flower boxes right outside, and a new bed in addition to his pillow. When Ross gets too possessive of toys, he also will sneak one up there all to himself! We should all be so relaxed

This could not have worked out any better.

Yes, we are the proud owners of Holley Jean Patten (formerly known as Shelley Schroeder). Holley is a sweet playful, loving dog. She LOVES to run and play. We are moving in March to a farm in Iowa, where the house will have a doggy door installed and she will have lots of room to play. Her nose is always to the ground when we take walks here. I can only imagine how much she will enjoy exploring the cornfields of Iowa, hunting, fishing and playing with her soon to meet dachshund cousins up there. It wouldn’t surprise me if she is seen on youtube or America's Funniest Home Videos, as she has a charming and bubbly personality and enjoys an audience. THANK YOU, for all this organization does to help dogs get a second chance. I hope all of Holley's dreams come true. Blessings!

I wanted to give you an update on Bonnie Boo and send you a few pictures. We are so happy to give this precious girl a forever home. She has been with us for over a month and it feels like she's been a a part of our family forever. Bonnie gets along with our male dachshund, Weenie; they are great play mates. She is such a snuggle bug and loves her new daddy. She's quite spoiled and loves to sleep with us. I'm so happy I found DREAM and am thankful for all of Marcie's help with our adoption.

We love seeing all the big brown eyes that look at us with love!
We can tell they were all happy
love
tweedles

Hooray for all those who have found forever homes.
Have a super Saturday.
Best wishes Molly

I'm so happy these babies are in loving forever homes.

Good thing these furiends are adopted! Otherwise Mom would want them all!
~Milly and Shelby

I love seeing all the pups who found their homes. Momma wishes she could get another one but it just isn't a good time now. Maybe sometime in the future.....

I hope both you and your Mommy are feeling good and had a terrific Thanksgiving!